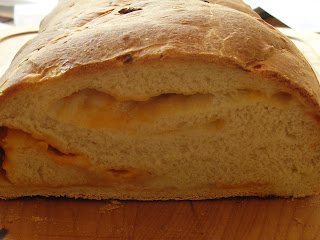 I recently made the Soft Cheese Bread shown in Peter Reinhart's Artisan Breads Every Day, with some success.  Overall, it's a very, very tasty loaf of bread, if quite rich.  I won't quote the amounts used in the recipe, but I will show the cost of each ingredient.

Putting it together was not at all difficult, though some preparation is involved: chopping onions and warming water/beer and milk.  I used beer: Twisted Pine Raspberry Wheat, which is a dark, flavorful brew I'd had a few times at the brewery itself.  Just mix the salt, sugar, and flour together; dissolve the yeast into the milk and beer; and add that and the melted butter to the flour mixture.  Mix until moistened, let it rest a few minutes, knead it a few minutes, and add the chopped onions.  The stand mixer had a bit of a problem with the load, as there's quite a bit of dough in there, so I had to knead the onions into the mass by hand.  It then goes into the fridge for an overnight fermentation.

The next step was a little more challenging: dividing it in half and rolling half out into a broad rectangle, then shredding all the cheese and sprinkling it on top.  I used sharp cheddar along with a little bit of cubed Gouda and shaved Parmesan and Romano cheeses.  It then gets rolled up and shaped as a loaf, batard, or rolls not unlike sticky buns.

Shaping the dough was a challenge, as you can see; I didn't get as tight a skin as I'd have liked on the batard.  Even so, after quite some time baking it all (I did the rolls first, then the batard), it came out well: the onions seem to have dissolved into the crumb, and there's a very nice sharp, cheesy flavor to the whole loaf.


My only real complaint is that this bread is extremely rich.  I had a couple of slices once the loaf had cooled, and it filled me up for the rest of the day.  Hence, it's not a real sandwich loaf (unless you're from Wisconsin).  Even so, it's extremely delicious.  Next time I make it, I'll cut the recipe in half.

The homemade version is cheaper, most probably tastier, and has fewer things like High Fructose Corn Syrup and Soy Lecithin in it.  What would you rather put into your body?
Posted by Dave at 4:26 PM