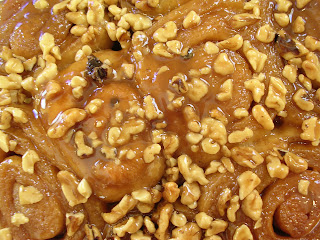 The name sounds like a condition rather than a dish, but they're delicious.  I used the King Arthur recipe for both the dough and the glaze, with a few alterations.

I first mixed all the dry ingredients for 30 seconds to incorporate them, then added the butter and warm water.  As I live in a dry climate, I put about 8.5 oz. of water in there to get a dough that was tacky, not sticky.  After a couple of minutes of mixing with the paddle, I switched to the dough hook and kneaded it for five minutes until it became a smooth, shiny ball.  After that, it went into an oiled container for a couple hours to rise to about double.

I made the glaze a little differently from the printed recipe, which called for all maple syrup or corn syrup.  Too much maple syrup, and the glaze tastes like breakfast.  For the rum, I used Malibu coconut rum, though I'm not sure if its addition added significantly to the quality of the end product.  One other change I made was replacing the called-for pecans with walnuts, which I already had in the pantry.  The glaze couldn't be easier to make: just whisk the melted butter, honey, rum, and maple syrup together, then divide it into the two pans.  Then sprinkle half of the brown sugar and nuts onto each pan, and set them aside. Once doubled, I put a Silpat onto my work surface, sprayed it with Pam, and patted the dough out into a 16" x 12" rectangle.  This proved to be very easy in two shifts (a ten minute break in-between gives the gluten time to relax so it doesn't fight the last few adjustments).  I used the Silpat mostly as a guide for measurement, as it has the same rough dimensions, and it's easier to clean oil off of it than the work surface I use.  I then sprinkled the filling all over the dough except for about an inch-long strip along the bottom.  From there, I rolled it up and made marks along its length so that I could get sixteen equal pieces.

Slicing isn't difficult: use a sharp serrated blade and let the weight of the knife do the cutting as you saw through.  Clean the blade a few times as you go so it doesn't get hung up, then place eight slices onto each prepared pan, trying to get them equidistant from each other.  Let them proof for an hour to 90 minutes, or until they're all touching in the pan.  From there, bake them for fifteen minutes, drape aluminum foil loosely over the tops, and bake them another fifteen to twenty, or until they're done.  You may want to put a pan on the rack under the buns as they bake to catch any glaze that bubbles up over the edge of the pan. Don't let them over-bake; the middle ones may not darken as much as the ones on the edge, but if they have some nice color on them, they're done.

Taking them out and flipping them over presents a very mild challenge: put the aluminum foil you draped over the top onto the counter, then place your rack upside-down on the surface of the buns still in the pan.  Over the aluminum foil, flip the pan upside-down and set the rack, now right-side up, onto the aluminum foil (which will catch dripping glaze).  The glaze sets up rather quickly, so scrape any remaining glaze and nuts from the bottom of the pan onto the buns as fast as possible.  You may want to leave the second pan in the cooling oven while you unmold the first so that the glaze remains hot and in its most liquid form.

One criticism I've heard about the glaze is that it sets up too firm, making a stiffer caramel.  Personally, I like it better that way, but you can adjust by adding more butter to the glaze and using less brown sugar on top.  The maple syrup adds a nice flavor to it that you don't often experience out of maple-syrup-specific desserts like maple candy, but as I mentioned before, too much in the glaze and you're in French toast territory.  The crumb is nice and soft and buttery without being too rich.  I've made sticky buns in the past, but the King Arthur variety is the best I've found.

For 52% of the price, you can have a tasty (if sugary and fatty) dessert that you made at home with your own two hands, or you can eat Xanthan Gum, Propylene Glycol Monoesters, and Polysorbate 60 with your pastry.  I used to eat Entenmann's products, especially when I lived on the East Coast.  Not anymore.

(At Oriana's reminder, I've submitted this post to Yeastspotting.)
Posted by Dave at 1:50 PM