It's been several years since I've had challah, which is an egg-rich bread typically served on the Jewish sabbath, and my East Coast sensibilities typically prohibit me from purchasing a ready-made challah from a bakery, so I decided I'd give it a try at home.

The biggest challenges were the number of egg yolks (I used nine to achieve the desired weight) and the amount of flour (34 ounces, or a little over two pounds).  My stand mixer was not going to be able to handle this, at least with the dough hook attachment.  In my earlier post, I mentioned how a recipe of over five cups of flour would cause some difficulty, so obviously a recipe containing over seven cups of flour would be impossible for my size mixer.  This would be a bit of a gut-check.  I wasn't used to making bread without my trusty dough hook.  Was I up to the challenge? 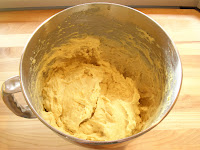 It mixed a bit like a cake batter: all the liquid ingredients and sugar went in first, and then the flour.  The paddle attachment was up to just above its neck in ingredients, but pushed on through for the first two minutes of mixing.  I ended up with a coarse, shaggy dough that I let rest for five minutes..  The directions suggested stirring the dough for another four minutes after the first rest, so I got a heavy plastic spoon ready and got to work. 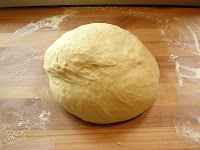 Stirring the dough was almost impossible.  There was a great deal of it, and while it was still fairly sticky and wet, it fought me at every turn.  I found after some wrestling that the easiest way to move the dough around the bowl was to move the bowl and the spoon almost like I was folding it.  It was a fairly good, if short workout.  Imagine what it might have done to the motor of a stand mixer.  A couple of minutes' worth of kneading came after, which was rather easier, and I formed it into a ball which I subsequently put into an oiled bowl in the refrigerator to rise for at least a day.

The big choice is: do I give it the traditional braid, or do I just plop it into loaf pans?  Go big or go home.
Posted by Dave at 1:40 PM