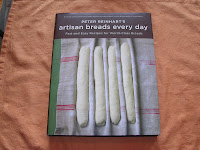 The earliest recipes I'll be following on this blog will be taken from Peter Reinhart's Artisan Breads Every Day, as my focus is on artisan breadmaking.  Some of the things that characterize artisan breads is a slow rising and fermentation process, higher hydration levels in the dough, and gentle shaping methods.  Anyone can make a standard loaf of bread with the texture of open-cell foam by following the directions on a bread machine.  That's easy.  But for that crusty, tasty bread with large, irregular-shaped holes throughout the loaf, a little more care and technique is needed.  I have to emphasize that the term here is a little more care and technique.  I'm not an expert; I'm feeling my way along and going step by step as the recipe describes.  But after some repetition I've already had great success.  If I can do it, you can do it.

Day One: Mixing and Rising 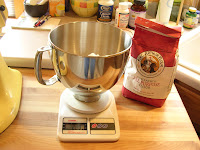 I won't provide the full list of ingredients here; interested readers should purchase Mr. Reinhart's book to get the details.  Because my scale only goes to one decimal point for weights, I measured the flour, using King Arthur Unbleached All-Purpose flour (I like the King Arthur flours for both the quality of the product and the name, which is cool), sugar, and salt by weight.

The recipe also called for 17 ounces of lukewarm whole or low-fat milk, which I also weighed out and microwaved on high for 1:40 to get it to that warm-but-not-hot temperature.  The milk I used was what we had on hand: skim milk.  I hoped to offset the fat-free quality of the milk by using melted butter rather than the preferred vegetable oil; time will have to tell when it comes to tasting.  After measuring the yeast with teaspoons and whisking it into the milk to dissolve it, I added the mixture, plus the melted butter, into the flour and mixed it with the paddle attachment at the slowest speed for a minute. 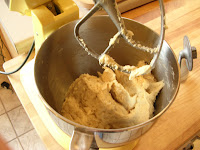 This is what it looked like after a minute's mixing: a soft, coarse ball (which is exactly what it's supposed to do).  There's typically a gut check when the mixer has gone for a half-minute and the ingredients don't seem to come together as promised, and you may want to quickly add what it appears to need: flour or water.  Don't.  Just wait.  Let the mixer do its job.  It'll get there, especially if you followed directions. 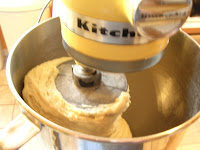 The recipe suggested switching to the dough hook and mixing for a few more minutes to create "a smooth, soft, slightly sticky ball of dough".  One thing that usually happens with my Kitchenaid model when using the dough hook on a recipe that has more than five cups of flour is that the mixture tends to climb up the hook onto the top.  Sometimes it fixes itself, but usually not: just stop the machine, push the dough down with a rubber scraper, and get back to mixing.  The important thing is that you don't just start it and leave it: if the dough gets into the mixing mechanism, it's a pain to clean and gets gray lubricant into the mixture, which you don't want to eat. 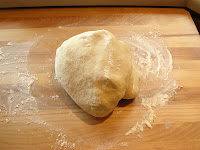 After the mixing, the dough did what it was supposed to do: it became soft, supple, and tacky but not sticky.  A sticky dough will, when touched, leave a bit of itself on your hand.  A tacky dough will stick and peel off.  I kneaded it on a floured work surface for a minute by hand, and formed it into a ball.  My concern at this point was that maybe it was a little too dry.  It was still tacky, but was it tacky enough?  What if the dough's over-floured?  This isn't like cooking spaghetti sauce, you know.  Things have to be exact.  Is it screwed up already?  What if it doesn't rise?  Anyway, you get the idea. 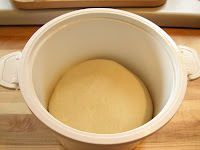 At this point, I sprayed my favorite rising bowl with Pam and put the heavy dough ball into it.  The bowl used to be the reservoir part of a vegetable steamer we no longer use, and has served me well for years as a place to put rising dough.  It's tall, non-reactive, and the handles are nice for toting it around as necessary.  After that, I covered it in plastic wrap and put it into the fridge to rise.  Total preparation time was about forty minutes or so, including taking photos and notes.  It got into the refrigerator at 1:30 PM, and would stay there overnight until I was ready to start baking.

As it turned out, I didn't have to worry about the dough not rising.  By 4:30, it was already touching the top of the plastic wrap.

Day Two: Shaping and Baking
I let the dough rise overnight, and it didn't press beyond touching the very top of the plastic wrap.  At 2:00 PM I took the dough out of the fridge and began the shaping process. 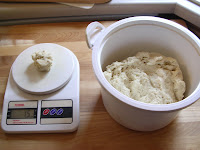 Each roll is supposed to be 1.5 ounces rolled into a tight ball and placed on a parchment paper-covered baking sheet about an inch and a half apart. One thing I discovered is that when it says "tight ball," it means "tight ball."  The initial rolls I formed weren't as tight, and when they proofed for the suggested two hours, they undid themselves and ended up looking more like alien creatures with flippers than rolls.

I preheated the oven to 375 for an hour before I intended to bake them.  They were going to have to go in three batches, as I could only fit twelve rolls onto a baking sheet at one time without crowding them.  As the directions stated, I moistened my thumb and pressed into the center of the roll almost to the bottom, then widened the hole to accommodate the filling.  I used three types of fillings: lemon curd, which I made according to the recipe in the book, cherry pie filling, and blueberry filling.  A teaspoon was enough to fill the holes, and into the oven they went for the first eight minutes.

This gave me enough time to made the white fondant drizzle that would go over the top.  It was a standard recipe: confectioner's sugar, milk, vanilla.  The author suggested also adding corn syrup, so I added that, also.  I've made this white fondant drizzle before for many other recipes, but I made the error of going only on the author's recipe rather than my personal judgment.  While the drizzle was good, it was looser than I typically like; I prefer it to harden solid as it dries, and this version became almost like a glaze.  That's fine; I added more sugar to the mix to stiffen it a bit.

After eight minutes, when I opened the oven to turn the baking sheet around and ensure even heat was getting to the rolls, I was greeted with an unpleasant surprise: the depressions in the rolls had almost completely puffed up and out, and the filling had become a topping.  What had I done wrong?  Was it the skim milk?  The butter instead of oil?  Too much yeast in the dough for my altitude?  Unfortunately, I won't know this time around. 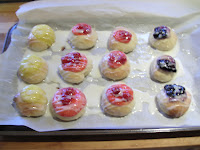 After another nine minutes, I took them out of the oven, glazed the sides with a pastry brush dipped into the fondant while they were still hot, and waited for them to cool before drizzling the fondant on top.

My initial disappointment with their appearance was significantly ameliorated by the taste of a finished roll.  The dough was tender and sweet but not too sweet, and the icing and fruit filling/topping was delicious.  Overall, I really quite like them.  When baking at home, you always want to have things turn out just like the picture.  This time, they didn't.  But the end product turned out well in taste and quality.

I'll have to make the recipe again some time, but will put in less yeast.  Again, I'm not sure why they over-rose in the oven, but the experimentation will be fun.