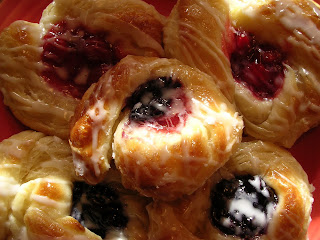 When my beloved wife got me a copy of Peter Reinhart's Artisan Breads Every Day, one of the recipes that really grabbed my attention was the one for laminated dough.  In the past, I'd eaten more than my fair share of danishes, croissants and the like, but once I had learned how the dough was made (dozens if not hundreds of layers of butter and dough), I assumed that the creation of such treats required heavy rolling machinery, or the dedication of professional bakers in a commercial kitchen.

This is, of course, false.  However, making laminated dough is far from an easy thing, as I read in the book.  But it was doable.  There are some significant challenges: regulating temperature properly, rolling the dough to certain measurements, shaping, and others.  And while I was ultimately successful in that I made a buttery, flaky pastry that's quite delicious, there were some errors I committed during the process that made themselves known in the final product.

The détrempe is the dough part of the laminated dough; it's the bread part of the bread-and-butter sandwich that is laminated dough.  Making it is easy enough, though you want to make sure that everything stays fairly chilled.  So you don't dissolve the yeast in any of the liquids, but instead first mix it with the flour, salt, and sugar, then you add the cold water and milk and melted butter.  What you should have at the end is something like this:

And, as usual for ABED, you put the dough in the refrigerator overnight to let it ferment.  I'll admit that even selecting this recipe to try was a bit of a gut check, so I was looking forward to the next day when it all came together.

The other part of laminated dough is a butter block: a slab of butter that goes in between the layers of the détrempe.

The intent here is to break up the butter and incorporate the flour into it without melting the butter.  Essentially, you want a cool paste.  If it gets too warm, put it in the refrigerator for a few minutes to cool off.  My problem when making this was that I was too concerned about overheating it, so while I mixed it up fairly decently, there were still some largish bits of butter in the mass that proved difficult to deal with later on.  Better next time to run the risk of getting it warm by mixing it more and making sure the butter is of that paste consistency; you can always refrigerate it later.

After that, you have to shape the butter block into a 6" square.  Describing it is easier than doing it: put it on a piece of parchment paper or silicone mat, cover it with plastic wrap, and tap, roll, press, or otherwise form it into the square, using whatever tools you have available: spatula, pastry scraper, ruler, etc.  My initial efforts made a larger rectangle than square, so I used a ruler to measure off the proper dimensions, cut around them, and added the extra on top.  After some pressing with the spatula and a rolling pin, I got a butter block of about 6 1/2".  It wasn't worth it to me to do more cutting; I figured I could always roll out the dough part a little flatter to cover it.  The butter block then went into the refrigerator to cool back off.  You don't want it too warm or soft when incorporating it into the dough, or it might melt a bit.  The important thing to remember is that it is doable, despite the difficulty.  Pulling the plastic wrap taut as you square off the edges with a straight edge helps a great deal.

After that, take the détrempe out of the refrigerator, dust the working surface with flour, and roll out the dough to about 12 1/2" x 6 1/2".  I had to do mine a bit bigger because the butter block was larger.  This was a little easier than expected, and didn't shrink back a great deal as I was rolling it out.  Hence, I was able to roll it all out in one session without having to give the dough a rest.  You want to have the corners and edges as squared-off as possible.  If necessary, push the sides in a little with a straight edge of some kind.  I ended up having to fold one end under a bit during the initial roll-out so I had more room for the long side.  Once that's done, you put the butter block onto one half of the dough and fold the other half on top of it, pinching the edges together to make a seal.  Don't worry too much about getting a perfect seal: all the flour you've put on and under it during the rolling may make that difficult.  I used a Silpat, so the butter block peeled off the surface and onto the dough pretty easily.

After that, it's time to make the layers.  Roll out the sandwich into a 16" x 9" rectangle and fold it as if folding a letter.  You should have something that resembles this at least a little:

Then, let it rest for twenty minutes so you can do more rolling: roll it out to another 16" x 9" rectangle and fold it letter-style again.  Another rest, and another roll-and-fold.  This is where I ran into the most amount of difficulty.  Because the butter block didn't have the paste consistency, there were some larger chunks of cold butter in the mass that poked out the surface of the dough in unlovely clots.  Far from the end of the world, but what it meant was that some of the layers were already broken by the rolling and folding.  Also, the dough often required long rests in the middle of rolling so that it wouldn't fight and shrink back so much.  This aspect of the process was extremely time-consuming: roll for a while, let it rest.  Roll, rest.  Repeat.  Eventually, after the final fold and a rest in the refrigerator, I was able to complete the final rolling: a 24" x 9" rectangle (or thereabouts).

It may be difficult to see in the photo, but note the slight tear in the surface in the upper-middle left area.  Also note the air bubbles on the edge.  Despite the layering, this is still a yeast dough, and some action is going on in there.

After that, I used a pizza cutter to slice the dough into about twenty-two strips: each one would become a danish in one shape or other.  Rather than get too fancy with shapes at this outing, I just went with three: round, S-shaped double snail, and eyeglass-shaped double snail.  If I do this again, I'll probably make some pinwheels, but these are fine for now.  You twist the strips and then shape with the twisted strips.  One mistake I made was that I didn't tuck the ends under on the round danish, so they've all got little handles on them.

From there, I proofed them for about two hours, preheated the oven, made an indentation in the center of the round parts, and put a teaspoon or so of cherry ($1.47) or blueberry ($1.33) pie filling into each danish.  As the oven preheated, I made the glaze and fondant.

When I opened the oven to turn the baking tray around, I saw that some of the butter leaked out of the dough, almost bathing the pastries in bubbling butter.  They hadn't browned significantly, so I hoped that they would in the next six minutes or so.  My fears proved unfounded, and I was presented with golden brown danish when I next opened the oven to check, so I took them out and painted on the simmering glaze while it and the danish were still hot.  After a few minutes, I drizzled the fondant on top, and there they were: danish.  But the proof of the pudding (or pastry, in this case), is in the eating.  Were they worth the effort? 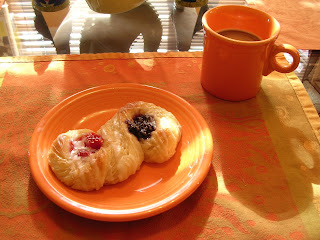 Yes.  They were flaky and delicious, despite (or because of) their imperfection.  And they came out of my kitchen!  The caveat is that making them is an extremely time-consuming process, from the butter block to the rolling to the shaping.  This time, I went with canned pie filling because I didn't have berries at home to make it myself.  If our waistlines and my time allow, future danish will be made with only natural ingredients.  Whatever I do in future baking, I'll always know I can make laminated dough and do some really tasty things with it.

The homemade version is 39% of the price of the prepackaged variety, and came out of a kitchen that has a 0% allowable percentage of foreign material in the process.

(This post was submitted to Yeastspotting.)
Posted by Dave at 7:38 AM