Day One can be found here. 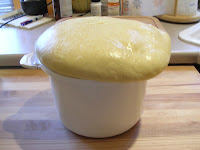 When I got to the dough the next morning, it had become a monster, rising up and out of the container in an ever-expanding mass of gluten.  This should have been expected, as the dough's nine egg yolks and tablespoon of yeast suggested that the rise would be significant.  The accompanying photo was taken after the plastic wrap was removed from the mass; it was actually several inches taller, but the act of peeling off the Saran wrap started to deflate the dough.  Now it was time to shape. 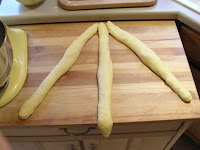 This is where the scale comes in.  This dough was enough for two large loaves, so that had to be divided in half.  And as I'd planned to braid the loaves into traditional shapes, each braid had to be the exact same length and weight.  The first loaf was going to be a three-braid job, and the second was going to be a five-braid job.  After dividing and weighing and dividing again, the challenge was rolling out the dough into the same-length braids.  The best way to do it was in stages: roll them into basic cigar shapes, one at a time, and let them rest a few minutes so the gluten would relax.  Then roll them out some more, relax, roll more, relax.  Eventually, I had three long ropes of dough, which I wove into a braid with the help of my wife, whose experience in hair braiding was invaluable. 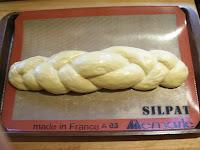 The trick with braiding dough is that you want very tight braids, making as close to a 90 degree angle as you can.  For a three-braid loaf, you start in the middle and do one end, seal the tips, and then do the other end.  As you can see here, the central braid ended up being a bit large, which is fine.  We of course want to do the best job possible, but for a first-time braider and challah-baker, I think it's actually pretty good.  I placed it on a Silpat, brushed an egg white and water mixture on the surface, and set it aside for its two hour rise.

The five-braid loaf was a bit trickier, and I actually messed it up the first time so badly that I had to wad it all up and start it over again.  The problem was that I'd made the initial braids too large, and with the general tackiness of the dough, it was impossible to get it unwoven.


There's a certain lean to the left with this loaf, but it's not the end of the world.  There's also a little "thumb" at the end, or as I described it, a "got your nose" tip.  Future iterations will not include either feature.  After an hour of rising for each, I applied another egg wash and sprinkled on some sesame seeds.  Then came more rising, and each loaf expanded to prodigious size.  The five-braid load went into the fridge so that it wouldn't over-proof while the three-braid job was placed into the oven.  Here are the results of all the baking:


Note the rich, dark color of the crust.  The crumb inside is very tender and flavorful, as well as extremely rich.  There's enough bread in both loaves to feed the National Guard.

Future challahs will be done a little differently.  First, I'll cut the recipe in half; while this bread will keep for quite some time, there's too much of it for me and my wife to eat.  Second, the loaves will be a bit smaller.  Third, I plan to practice my bread-braiding skills some more so as to minimize bulges, doglegs to the left, and thumb-tips at the end.  But overall, I'm really pleased with the results.  It's a very good bread, and I feel a certain sense of not only accomplishment in making it, but renewed connection to my Jewish faith and culture.
Posted by Dave at 11:51 AM