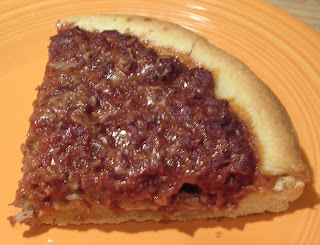 Pizza is a favorite meal at our house.  It's an excellent vehicle for leftovers (except for pizza leftovers, which would be weird), and a Friday or Saturday night pizza pie is something to look forward to after a long work week.  For years, I'd been making pizza using the calzone recipe from the Moosewood Cookbook, and while it was good, it didn't have that East Coast-style crust that we miss living in Colorado.  Then, my wife got me Peter Reinhart's Artisan Breads Every Day, which was a game-changer.  Now, delicious pizzas with that char on the crust are within reach.  We did it.  But it's not enough to sit on your laurels: reach higher.  Do more.  The new challenge was to make Chicago-style deep dish pizza.  I went with the King Arthur Flour recipe, with great but not perfect success.

Making the dough itself couldn't be easier: just mix everything up and knead it for several minutes until it becomes a smooth dough.  It'll feel a little bit gritty because of the cornmeal.  Then, let it rise for an hour, and it'll look like this:

While it rises, prepare a couple 9" cake pans by hitting them with spray oil and drizzling a little bit of olive oil into them.  Roll the oil around so that it goes up along the sides, so it looks like this:

A note about sauce: most of the Chicago-style pizza recipes I've seen call for a relatively unseasoned sauce: crushed tomatoes with a little Italian seasoning mixed into it.  As I love to make red sauce almost as much as I like to eat it, I deviated from the recipe and made my own pizza sauce.

Mix everything into a saucepan and let it simmer on low for an hour.  It should be good to go then.  If you want it to taste even better, make the sauce the day before and let it sit in the refrigerator overnight so that the flavors really meld together. I decided to put in the veggie crumbles to make it almost like a bolognese sauce to add some fiber and protein.

Once the dough has risen, divide it in half, flatten it out some, put it into the pans, and begin shaping.  You want it to go up the sides so that you can put all the toppings inside the crust.  Like a pie.  Some of the olive oil will ooze up a bit over the sides, but it's okay.  When the dough starts to fight you a bit, cover it and let it rest for fifteen minutes.  After a couple of shapings, it should fill the pan the way you want it to.

The crust gets crunchy despite the heavy toppings inside it because of the pre-bake.  So you put the pan into the oven and bake it at 425 for ten minutes.  Mine rose more than I would have liked during its initial stint in the oven, so I pressed it back down a bit.  This is what it looked like after the pre-bake:

According to the recipe, you put .375 lbs of sliced mozzarella cheese into each pan, then .5 lbs of sausage.  I put a half cup of half-skim shredded mozzarella ($0.86) and some chopped leftover turkey burgers inside ($2.55, approximately).

I grated a little bit of Parmesan on top that we got from Zingerman's, and the pizzas went back into the oven for 25 minutes.  It's difficult to slip them out of the pans while they're not, but not as tough as it is to wait fifteen minutes for them to set up before eating.

They turned out really, really well.  The crust was crunchy and flaky from the butter and two kinds of oil, with a nice, toothsome bite from the cornmeal. It's a filling sort of pie, especially with the veggie crumbles.  My only problems were that the crust rose unexpectedly during the pre-bake, and that I didn't press it into the corners of the cake pan as much as I should have.  Despite that, I'm not at all disappointed with the final product.  It's a Chicago pizza.

Compare that to a Chicago-style deep dish pizza: you can spend around $15.00 per same-sized pie at a restaurant or delivery place, and you don't have to tip the waiter at home.  You know what's in it, you know who handled it, and you can put in anything you want.
Posted by Dave at 8:29 PM