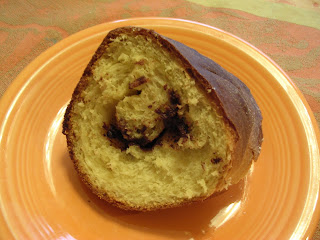 This recipe, a cross between cake and bread, was taken from Peter Reinhart's Artisan Bread Every Day.  Overall, it's not difficult to make (unlike laminated dough), and turned out well.  Because I made it in a Bundt pan, I was unable to give it a streusel topping.  Even so, I don't think the end product suffers from the lack.

Making the dough is similar to making quick breads or muffins: mix the yeast into the warm milk and set aside while you cream the butter and sugar, then add the egg yolks and vanilla until fluffy.  From there, just mix in the flour, salt, and milk-yeast mixture until you get a fairly solid mass of dough.  Knead the dough by hand a little, and let it rise for a couple of hours.  It won't get very big, but it'll swell up a bit.  While it rises, make the filling.

Just put the frozen chocolate chips into a food processor and chop them up until they're little bits, but not quite dust.  Please be aware that doing this is extremely loud.  Hearing protection isn't a bad idea, to be honest: if a sound is loud enough to hurt your ears, it's doing damage to them.  Add the cinnamon, mix a little, and then add the cold butter in pieces.  You should end up with something that looks like this:

At the end of the ferment, roll the dough out into a 15" square and sprinkle the filling on top except for the very edges.

Then roll it up and give it a gentle twist on both ends to create the spiral.  There are plenty of options for shaping here: Bundt pan, loaf pan, or get fancy and do a Kranz cake.  I went with the Bundt option, as this seemed like a cake-y sort of thing to me.  Press the rolled-up, twisted dough into the Bundt pan and press it into the bottom.  It's tricky, but try to level it so it's fairly even.  This is what I managed:

Note the two lines: the long curve is the seam from the initial roll and twist.  The line in the upper right area is the seam from both ends pressed together.  In retrospect, I might have moistened the ends before pressing them together to create a tighter seal.  Now, let it proof for two and a half hours, and this is what it'll look like:

It gets pretty poofy and tall.  Wait for it to just clear the top of the pan before baking.  After a trip in the oven (about 33 minutes is what mine took), this is what came out when unmolded:

Note once again the lines from the seams.  The one on the left end is, obviously, from the initial roll and twist.  The wide one on the bottom right: that's from not having created a great seal of the ends.  This is the slice I took out first to have a look at the crumb. 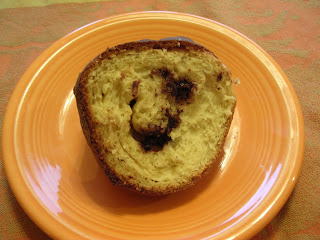 The crumb is light and fluffy.  Despite that this looks like a cake, it doesn't at all taste like one, and has the lightness of a yeasted dough.

If you want to gild the lily, I suppose you could add a glaze or a fondant icing drizzle to the top, but it doesn't need it.

There's a certain cost difference there, and with the homemade babka, you don't have to eat Sorbitan Monostearate and Polysorbate 60 if you don't want to.